On my recent trip back ‘home’ to Huntsville, Alabama… I visited the Space and Rocket Center. I had lived in Huntsville previously for many years but never got around to actually paying a proper visit to the museum. I guess when something is so convenient, it’s easily put off until a later date. So, I took my son with me to see the museum. Amongst the many statues and tributes leading up to the space museum, was a small marker just outside the main entrance. Curiously enough, there were several bananas placed atop the marker. Upon closer inspection, this small marker bore the name of ‘Miss Baker’.

The younger generation may not know who Miss Baker was, but growing up in Huntsville, my generation was privileged to be front and center witnesses to the nation’s space race. Miss Baker was an icon of the ‘space race’ between the United States and the U.S.S.R. (the former Soviet Union, to you millennial crumb catchers). Miss Baker was one of two animals launched into space by the United States in 1959. The other was Miss Able, who expired 4 days after her flight, while having electrodes removed from her head.

Miss Baker survived her flight and went on to become the oldest living squirrel monkey, passing away due to kidney failure in 1984. She spent her last years living at the U.S. Space & Rocket Center. The marker is her tombstone, and one can usually find a banana or so placed upon it in her memory. Rest well, Miss Baker.

Below are two pictures. The first is of the containment vessel used to house Miss Baker during her flight. The second, is of the Jupiter nosecone in which Able and Baker rode. The flight went to an altitude of 360 miles, and traveled a distance of 1,700 miles. The sign goes on to say the two monkeys withstood 38 times the normal pull of gravity during launch. 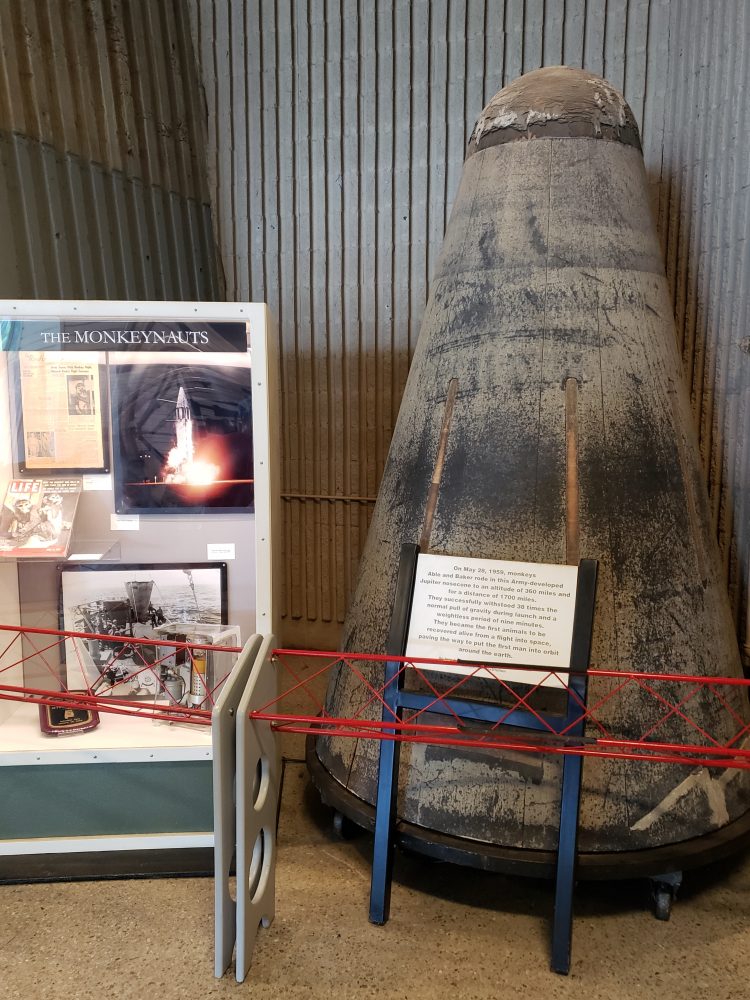